In cooperation between the Fiqh Council (FC) of the Muslim world League (MWL) and the Islamic Crescents' Observation Project (ICOP) several meetings and a conference were organized in order to find a method to calculate the Fajr and Isha times when they disappear in some area at a certain time of the year.

The first meeting was held in Riyadh (Saudi Arabia) on 08 May 2008. In this meeting all the major methods were discussed with their advantages and disadvantages, and the participants agreed to do some calculations for different methods to be discussed in the following meeting.

The second meeting was held in Riyadh (Saudi Arabia) on 14 June 2008. In this meeting, more thorough discussions were conducted, and the results of the calculations were discussed. The participants agreed to have a conference in a European country in order to continue the discussion with the concerned people. Belgium was chosen to hold the conference in.

The conference was held in Brussels in 25-26 May 2009, where several scholars, astronomers and official delegations participated in the conference. At the end of the conference, the official committee formed by the FC agreed to adopt a certain method to do the calculations, and the committee members agreed that this method has the least disadvantages. Thus, the members agreed to do the calculations for different cities in Europe, and these results would be discussed in a final meeting later on. The recommendations of the conference if found below:- 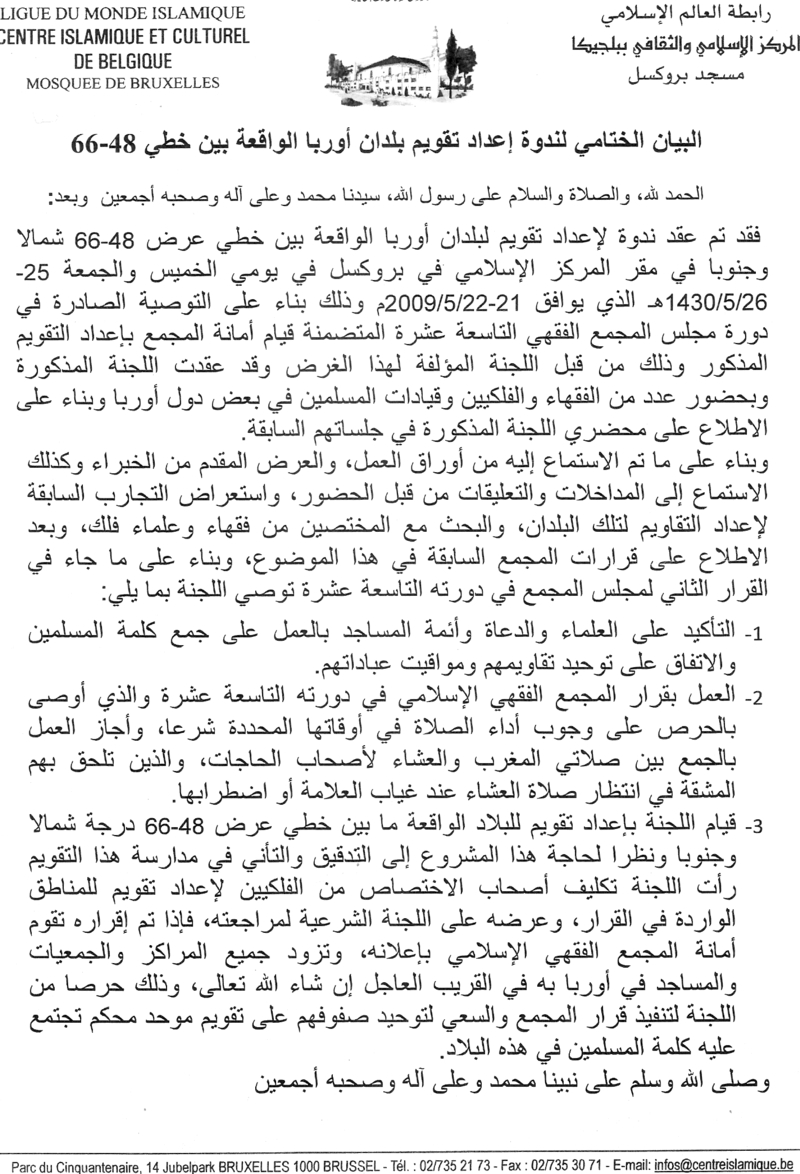 The last and final meeting was held in Mecca on 01 August 2009, in this meeting the alternative prayer times using the adopted method were displayed and the members discussed the results, and finally the committee approved this method. Afterwards, the calculations were done for the major European cities, and then they were distributed by the MWL to Islamic centers in Europe. Kindly click on the below image to read the minutes of meeting. 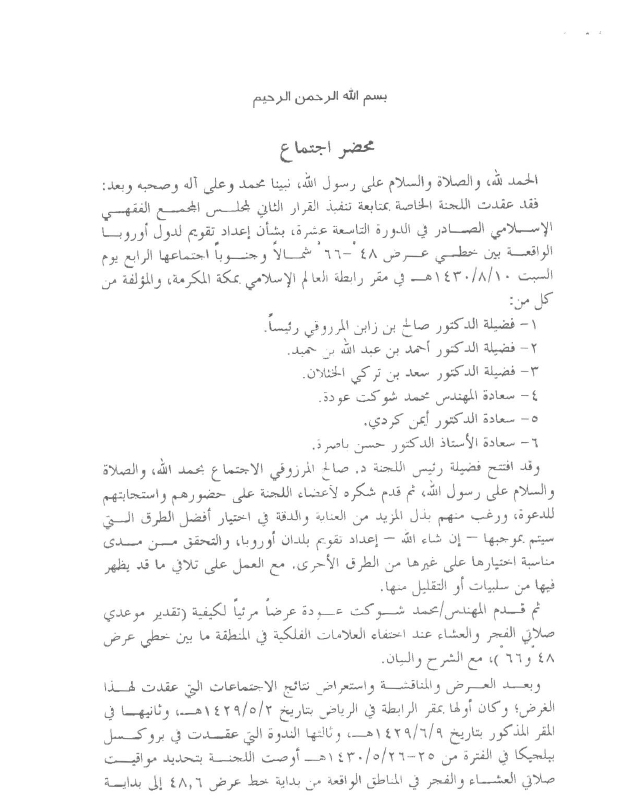 The adopted method is called "Local Relative Estimation", and the alternative prayer times are found using the following procedure:-

The above mentioned procedure was added to the software Accurate Times starting form the version 5.2. So, if you would like to generate the prayer times for a high latitude areas, then please download Accurate Times, open the "Preferences" menu, enable the option "Enable Alternative Prayer Time Calculations" and then you can do the calculations for your area. The alternative prayer times will be marked by a special symbol beside the prayer time to distinguish the actual times form the alternative times. All the suggested methods and the adopted method are discussed in details in this paper. (Arabic Language)

The members of the official committee formed by the FC who attended the last meeting were:-

By Moh'd Odeh. Copyright © 1998-2009 Islamic Crescents' Observation Project (ICOP), All Rights Reserved. This material may not be reproduced in any form without permission. For more information Kindly send E-mail
Copyrights reserved IAC © 1998-2022. Powered and developed by